Coffee has been healthy all along!

As long as coffee has been around, people have been speculating about its effect on your health, with opinions going back and forth over the years. Recent meta-analysis published in the British Medical Journal suggests that moderate coffee intake can actually have several positive health benefits, some of which are the polar opposite to historical assumptions.

The study has found that drinking 3-4 cups of coffee per day can reduce the risk of all cause mortality, cardiovascular mortality, and cardiovascular disease, plus the risk of incident cancer was shown to be 18% lower. Some previous studies have also linked coffee consumption with reductions in risk of other health problems, like diabetes, multiple sclerosis and Alzheimer’s. Be aware however though that consuming more than 4 cups a day has been linked to a higher risk of fractures in women, and also birth complications for pregnant women.

This may come as a surprise to some people who have read previously that coffee drinking was bad for your health and should be avoided. These older studies are largely discounted by today’s experts, due to the link between coffee consumption and smoking which wasn’t taken into consideration at the time.

Coffee and health throughout the years

Coffee has been around for many hundreds of years, and throughout this time opinion has varied drastically. Although that never seems to have too big an influence on its popularity! Here’s a quick rundown of how public opinion of our beloved bean has shifted over the years. 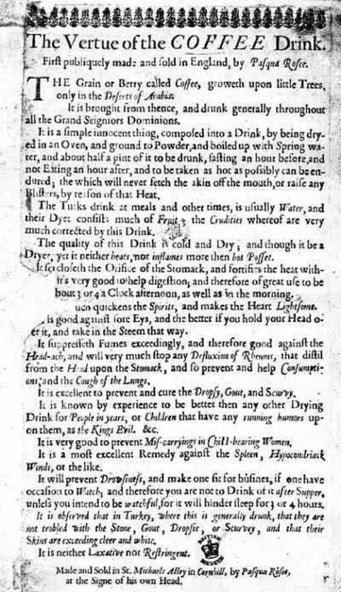 1511 –
Coffee houses  in Mecca shut down due to customers being considered gamblers and criminals.

1652 –
Coffee considered an aid to digestion, and cure for gout, scurvy, coughs and stomach aches.

1674 –
Coffee thought to cause impotence.

1800s –
Coffee considered a harmful drug that can make you go blind.

1916 –
Good Housekeeping Magazine reports that coffee can stunt your growth.

2007 –
Meta-analysis shows coffee can decrease risk of liver cancer by 43%.

2015 –
US Department of Agriculture states “coffee can be incorporated into a healthy lifestyle.

2017 –
Coffee associated with reduced risk in heart disease, all cause mortality and numerous types of cancer.

This recent link between coffee drinking and improved health seems to be well timed, considering the recent work around recycling coffee to make biofuel. Shell have recently started working with bio-bean who are a company that turn used coffee grounds into biofuel pellets, to use as a sustainable source of transport fuel. So not only is coffee healthy, but it’s ethical as well!

How to make the most of it

If you want to make the most out of this recent news and help to keep everyone healthy and full of energy, whether that’s your staff or your customers, having a high quality coffee machine on site is an absolute must. WMF have a wide range of bean-to-cup machines that cater for of any situation, from the compact WMF 1100 S to the robust WMF 9000 S+, which can produce up to 350 cups of coffee an hour!