Does the colour of your cup change the taste of your coffee?

It’s long been understood that the taste you experience with food and drink isn’t dependant on your taste buds alone. It has been proven that smell plays a huge role in how a drink tastes, which is the reason why wine glasses have that distinctive shape. But how much does sight impact the flavour of your coffee? A 2014 study suggests that the colour of the cup you’re drinking out of can have a significant effect on how the coffee is perceived to taste.

What the science says

The researchers came up with the study based on an idea that a barista had told them about how different coffee cups change the flavour of the drink, so they decided to put it to the test. They conducted an experiment based on serving identical lattes out of different coloured cups and asking participants to rate attributes such as the intensity and sweetness of the coffee.

The team conducted two experiments, the first using three different types of cup, and a second experiment to account for the minor differences in shape by using identical clear cups with a coloured plastic sleeve. Both experiments compared a clear cup, a white cup and a blue cup.

The first experiment found that there was a considerable difference between the perceived intensity of the flavour across the 3 cups, with white being the highest and clear the lowest. Although there was no significant difference noticed with the ratings for any of the other attributes. 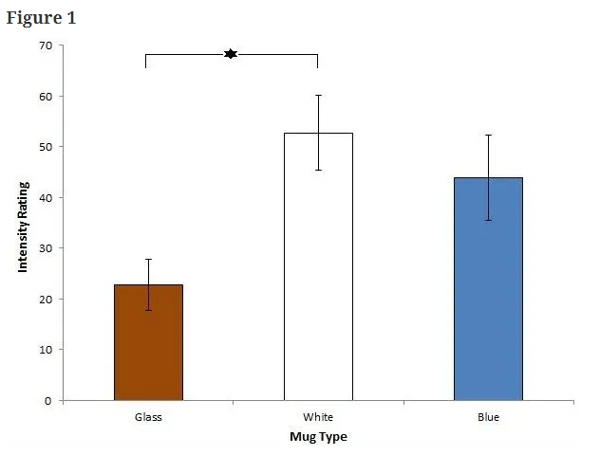 Interestingly the second experiment also showed a significant difference, but on the sweetness as opposed to the intensity. On this set of results, it was concluded that the white cup made the coffee taste significantly less sweet than the clear and blue versions.

What does this mean for coffee shops?

According to the findings it seems that the biggest difference is based on whether or not the coffee is served in a white cup. The theory on this is that a white cup shows the biggest contrast between the colour of the cup and the colour of the coffee, which could explain why it causes coffee drinkers to perceive the drink as being more intense, or less sweet. This is very interesting and could be used by coffee shops to their advantage, using traditional white coffee cups for intense drinks such as a filter coffee or americano. Where you want to accentuate the sweeter flavours on drinks like lattes and flat whites, you may be better off with clear or darker coloured cups.

Using the colour of your mugs to subtly influence the taste of your beverages will only really work if your drinks taste excellent to begin with. The fanciest cup in the world can’t cover up the taste of a poorly extracted espresso. That’s why having solid, reliable equipment is the backbone of any coffee business. WMF coffee machines use cutting edge automation technology to ensure that every drink you make is perfect every single time, leaving you free to focus on running your business and keeping your customers happy. Download a brochure to see our full range.