How do animals react to caffeine?

It’s been debated back and forth for many years about how healthy coffee is for humans, with experts now believing that moderate coffee consumption has numerous health benefits. If coffee is so good for man, what about man’s best friend? While both are mammals, there are plenty of things that we eat that can be terrible for our pets, like onions, chocolate, milk etc. So, should you share your morning brew with your 4 legged friend, or keep it all to yourself?

Everyone knows that despite being fairly healthy for humans in small amounts, you absolutely should not feed chocolate to your pets, and unfortunately the same is true of coffee. The chemical in chocolate that causes health issues for pets is called theobromine, which is very similar in nature to the caffeine found in coffee. This essentially means that for cats and dogs, caffeine is a poisonous substance that if ingested in large enough quantities, can be life threatening.

The effect that caffeine has on the pet depends on the size (much in the same way as it does with humans) and can range from hyperactivity and restlessness in lower doses, to seizures, hypothermia and ultimately death. Similarly to with chocolate, the amount ingested is the most important factor to consider, so licking a few drops of spilled coffee or tea probably won’t cause any major issues. But if you find your pet has somehow drank your flat white while you weren’t looking you should seek medical assistance immediately.

Be warned though that this doesn’t mean that decaf coffee is safe for pets either, especially if your drink contains sugar and/or milk. Refined sugar is about as terrible for dogs as it is for people, and most dogs and cats are lactose intolerant. 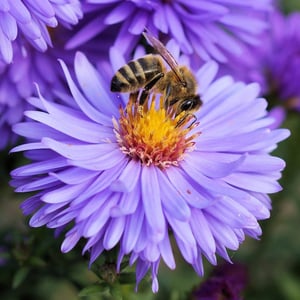 Interestingly, research has shown that caffeine can also influence the behaviour of bees. In 2013 a study at Newcastle University showed that small amounts of caffeine made honeybees more likely to remember a floral scent, which on paper sounds like it should help them to find food sources.

It’s not quite so simple however, and further research from the University of Sussex has suggested this may not be positive. This research used two feeders full of sugar water, one of which was laced with a low dose of caffeine. They found that caffeinated bees were more likely to perform the waggle dance that tells other bees about the food source, though they were also much less efficient and kept going back to the caffeinated food source even after it stopped being useful. Perhaps bees get just as addicted to their morning caffeine fix as people!

While you shouldn’t be sharing your brews with your cat or dog, that doesn’t mean you shouldn’t be getting maximum enjoyment out of your favourite drink. WMF coffee machines come in a wide range of sizes and features, including bean-to-cup, filter coffee, and classic portafilter style machines. With our top of the range automation technology, you’re sure to find something to fit your needs.