Coffee and chocolate – a match made in heaven

Coffee with chocolate is one of the all-time greatest food pairings, in fact it’s difficult to think of anything else that goes together quite so perfectly. Coffee and cocoa are both made using the fruit of tropical plants and are both grown in similar ecological conditions. In fact, many of major coffee growing regions are also major cocoa exporters; Columbia, Peru and Guatemala for example. Coffee of course contains high levels of caffeine; however you might not know that chocolate contains small amounts of caffeine as well, along with another powerful stimulant called theobromine.

Coffee and hot chocolate both made their way to the UK independently of each other, but it was only a matter of time until they started being combined! Let’s have a little look at the history of hot chocolate, and how it became inextricably linked to our beloved brew.

Chocolate drinks are a lot older than you may have realised, with ancient Mayans enjoying a chocolate based drink known as xocōlātl as far back as 500 BC. Xocōlātl was not at all like a modern hot chocolate though, it was a bitter, unsweetened drink made with cocoa paste and chilli, which was served cold. 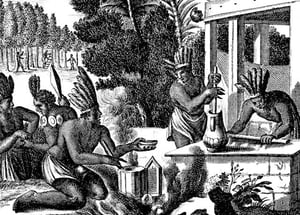 Chocolate wasn’t discovered by Europeans 1502, and it wasn’t introduced to Europe until Cortés brought cocoa beans and chocolate drink making equipment back to Spain in 1528. As this form of chocolate was both bitter and incredibly expensive, it was more of a luxury item than the every day beverage we know today. Although still very expensive, popularity grew in the 17th century when sweetened hot chocolate drinks first arose, resulting in a chocolate craze in the Spanish upper classes. Of course, over the years the price of cocoa has dropped lower and lower, making hot chocolate a drink everyone can enjoy around the world.

The most common term you will likely see for a chocolate based coffee drink in the UK is a mocha, which is usually a hot chocolate made with sweetened cocoa powder and milk, with a shot of espresso added. Strangely the term mocha didn’t originally have anything to do with chocolate, it was a name for coffee imported from the Mocha region in Yemen. It’s not known exactly when or why we started using it for chocolate flavoured coffee, but it’s thought that this may be due to the mocha beans being known for having a slightly chocolatey taste.

Although the name remains fairly consistent, there are actually many ways a mocha can be prepared. While the most common recipe is to add espresso to a hot chocolate, it is sometimes made the other way around, with chocolate syrup being added to a latte. The method for making the hot chocolate base can vary as well, with powder, syrup, and melted chocolate all being commonly used.

One thing is for sure though, the combination of coffee and chocolate is always going to be delicious, and always going to be popular. That’s why it’s important that your coffee machine not only makes great coffee, but also great hot chocolate and therefore great mochas! The WMF 1500 S+ comes with the patented Choc Mixer, making cleaning and maintenance incredibly easy. Also, with the addition of Dynamic Milk you’re able to produce cold chocolate milk drinks as well, plus a wide variety of different milk foam consistencies.