Coffee growing regions around the world

Although coffee is incredibly popular all around the globe, it can’t be grown just anywhere. Coffee is a notoriously picky crop and only likes to grow under very specific conditions. As such it’s exclusively grown in sub-tropical climates close to the equator, with a high level of elevation.

Here’s a run down of some of the biggest coffee growing countries around the world, who are responsible for the production of the majority of the coffee beans you’ll find in the UK. 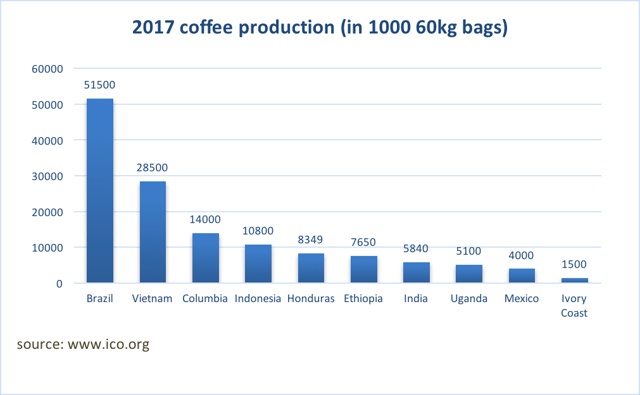 Brazil – The undisputed coffee growing champions of the world. The climate and elevation levels make Brazil an ideal environment for growing outstanding coffee beans. Interestingly, Brazilian farmers tend to dry the coffee cherries in the sun rather than using the standard washing process, which also contributes to the great flavour.

Columbia – Although synonymous with coffee drinking around the world, Columbia is now actually the 3rd largest producer, after Brazil and Vietnam. This is due to changes in temperature and increased rainfall, which has slowly had a negative impact on crop yields over the years.

Honduras – The top coffee producer in Central America. Honduras may not be as famous for coffee production as Brazil or Columbia, but it is still a vital part of the country’s economy.

Mexico – Coffee production in Mexico dwindled in the 90’s due to their inability to compete with the bigger regions after a legislation change. In recent years though there has been a resurgence due to increased demand from the US, with Mexico now being the 9th biggest coffee producer in the world.

Ethiopia – As the geographical home of arabica coffee, Ethiopia has a rich coffee culture. Coffee has been produced here for over 1000 years, and to this day they remain the biggest coffee producer in Africa.

Uganda – Coffee production in Uganda has risen massively since the 90’s when the industry was privatised. It’s now one of the biggest parts of their economy, with both Arabica and Robusta coffee being produced in large quantities.

Ivory Coast – Many people aren’t aware that the Ivory Coast even produce coffee, let alone that they are one of the biggest producers in the world. This may be because they grow mainly Robusta coffee which isn’t as expensive and is generally not as high quality as arabica.

Vietnam – Although mainly known around the world for the sweetened coffee drink made with condensed milk, Vietnam is now second only to Brazil in the scale of it’s coffee production. It has been growing steading since the 70’s, with Vietnam now being a major player in the global coffee market.

India – It may be more well known for growing tea, but India produces a huge amount of coffee every year as well. The coffee crops tend to be planted close to cinnamon and cardamom plantations, which is thought to contribute to the spiced flavour of the coffee.

Worldwide coffee production is always changing, so in years to come this list could change drastically. For example, in the 90’s Zimbabwe was the top coffee producing nation in Africa, but in the early 2000’s economic issues almost completely destroyed their coffee industry. In recent years though, small independent coffee growers have been slowly rebuilding the countries reputation as a supplier of outstanding quality coffee. They are now well on track to becoming a major player again, so perhaps they will be back at the top of the list before we know it.

As well as ensuring your coffee beans are the best quality available, you need to make sure you have the best machine to match. WMF coffee machines are the best way to make incredible tasting, professional quality coffee at the touch of a button, with no need for a barista. Download a brochure to see the whole range.