The coffee industry, and in turn coffee drinkers around the world, is at risk of a price increase in the not-to-distant future. The warmer temperatures caused by climate change are making it more and more difficult for coffee growing communities to keep up with production demands.

The recent boom of coffee culture around the world (third wave), has been a big factor in the increased consumption in recent years. According to the International Coffee Organisation, we've been consuming far more coffee than is being produced for three consecutive years now - we’re all to blame, but what can we say it’s just too good!

Some of you may remember the price increase of coffee back in 2011 and 2012. Unsurprisingly this was also down to a shortage in the production of coffee.

Brazil, the largest coffee grower in the world, produces 35% of the world’s coffee. In this period Brazil’s production of their countries famous Arabica beans dropped by 13%. Columbia also suffered, on the run up to this they experienced 3 years of low crop yields. The inclement weather together with coffee plant diseases and pests caused the crops to suffer resulting in the disappointing harvests.

At the time, the emerging markets like China and India increased on coffee production and saw much higher growth, but this couldn’t come close to supplementing the shortfall from South America.

A report published last month has suggested that Ethiopia will be especially affected. With this being Africa’s largest coffee exporter, it’s predicted that coffee growing areas could decrease by up to 60% in the next 50 years.

"The supply of high-quality coffee is severely threatened by climate change, diseases and pests, land pressure, and labour shortages - and demand for these coffees is rising every year. The logical result of that is that prices will need to rise, especially for the highest quality coffees, which are the most threatened."  - credit BBC

The market forecast is showing shortages in Robusta coffee, big price jumps due to some poor crop yields in Vietnam and Brazil. 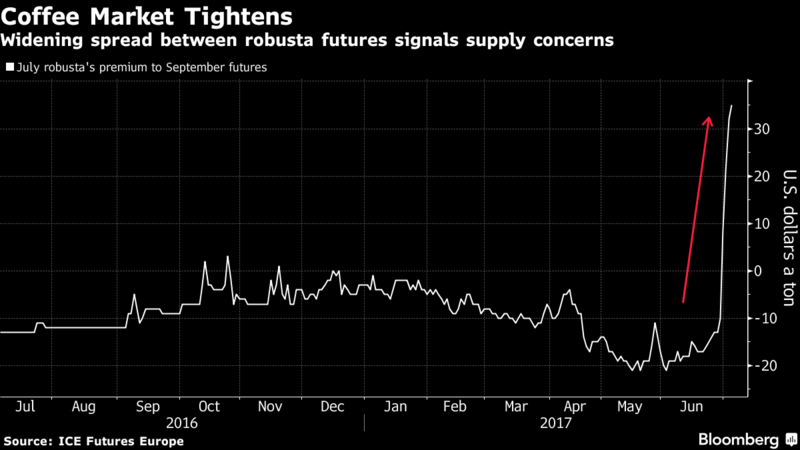 Warmer temperatures may be good for emerging markets like China and India, but the affect it has on the major players can throw the world into panic and ramp up costs for the consumer.

Leaf rust, pests and extreme weather conditions are become more damaging as the global temperature rises. See our blog on climate change to learn more about the effects it has on coffee growth and even its taste.