Coffee has long been one of our most versatile drinks, with everyone having their own favourite brew, technique, topping or flavour. The coffee boom continues with the latest developments by CLR CFF. We have had cold brew coffee, and nitro coffee, and now we have clear coffee. Although it might not be exactly what people have been asking for, for it doesn’t mean that it isn’t what we need/want! This has taken coffee in a different direction altogether, moving away from the coffee shop, latte art culture and more towards a healthy on the go lifestyle. We are sure a launch before summer is no coincidence either.

What is this clear coffee all about? 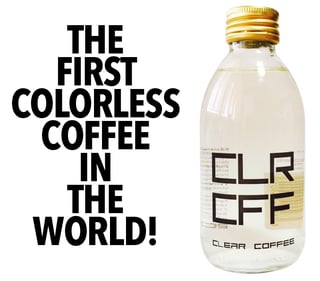 The creators and co-founders of CLR CFF are two Slovakian brothers, David and Adam Nag. They didn’t want to forfeit coffee in order to keep their teeth white, so they took this in their stride and developed “the first colourless coffee drink in the World”. Although, they’re keeping the brewing method and development of the coffee a secret from us all at the moment, they have advised that it’s a method that has never been used before.

“Due to this combination of technology and high quality ingredients a drink has been developed which is unique in taste and flavour”.

Made from only Arabica coffee beans and pure water, this drink has no preservatives, artificial colours (obviously), stabilisers, sugar or any sweeteners! This will have massive appeal to the health conscious/fitness lifestyle, which is in peak season this time of year. Or perhaps some people will just want to decrease their sugar intake without dropping their caffeine habit.

It’s most unique benefit, being completely clear, is aimed at those who “are looking for a refreshing coffee but you want to keep your smile white, then Clear Coffee is perfect for you!”. As it doesn’t have a dark colour, there are no worries about staining your teeth, which is what seems to be getting the most media attention.

Will this kick off the come back of “White Coke”.

In the 1940s at the request of Marshal of the Soviet Union Georgy Zhukov Coca-Cola made a clear version at the end of World War II. Zhukov was reluctant to be photographed or reported as consuming such a product as Coca-Cola was regarded as a symbol American imperialism. So, he found a work around, rather than giving up on his favourite drink he went through private channels to request this from Coca-Cola. A chemist was found who could remove the colouring from Coca-Cola, thereby granting Marshal Zhukov's wish. It was clear and packaged in a glass bottle with a red star, as he wanted to appear to be drinking vodka.

CLR CFF has some great reviews so far, and the taste has been compared to a cold brew coffee. We haven’t had the pleasure of tasting this yet, but look out for a review soon as our order is on its way. They are rolling out across Europe, and presumably will be in the high streets soon. In the meantime, you can buy directly from their website if you fancy a try.

Have you tried Clear Coffee? We would love to hear what you thought of the drink. Drop a comment below.