What exactly is a flat white?

The flat white has taken the UK coffee scene by storm over the last decade, quickly establishing itself as a favourite amongst casual coffee drinkers and connoisseurs alike. To the uninitiated though, the flat white can be somewhat confusing. Everybody knows that a latte is milky and a cappuccino is frothy, so where exactly does the flat white fit in?

The origins of the flat white are a little unclear, with a few different people claiming to be the inventor, however most people consider the drink to have come from either Australia or New Zealand in the mid-to-late 1980’s. While the drink was popular down under, it didn’t hit our shores until 2010 when Costa Coffee became the first UK chain to add it to their menus. It’s since become a standard coffee here in the UK, with America soon following suit.

Costa have just recently expanded their “flat” coffee offering with the flat mocha (a chocolatey flat white) and flat black (essentially a strong, short americano). In years to come maybe they will be just as popular.

Flat white vs latte vs cappuccino

Learn how to tell your milky coffees apart with our quick guide: 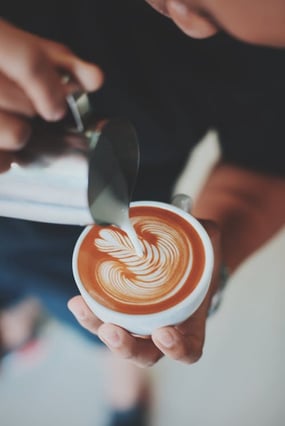 Coffee base – All 3 drinks generally start with a double espresso as the base, although flat whites will sometimes be made using a shorter ristretto run to avoid harshness.

Size – This varies from place to place, but generally a flat white is shorter than both a latte and a cappuccino, usually being served at about 160ml.

Strength – Due to being smaller, flat whites tend to taste stronger than either a latte or a cappuccino.

Milk texture – This is where the main difference lies. A flat white is made using steamed milk, or microfoam, without the foamy topping found on both the latte and cappuccino. The microfoam is what’s responsible for the drinks signature velvety texture.

Taste – Latte is literally just the Italian word for milk, due to the fact that it’s often the main thing you can taste, with the coffee being more of a flavouring. The flat white in comparison showcases the coffee much more and is more like a creamier tasting expresso.

As you can see, the main thing separating the flat white out from the other drinks is the texture of the milk used (see our previous blog for more info). A great way to focus on getting this right is using the WMF espresso machine, which automatically produces amazing espresso, giving you the time to focus on making sure the milk is just right.

Or if you don’t have trained baristas at your disposal, the WMF 5000 S can automatically produce perfect flat whites, plus a variety of other delicious beverages, using the advanced Dynamic Milk system. Never settle for a not-so-flat flat white again! Download a brochure to see the whole range.