What kinds of milk are best for coffee?

As any barista will tell you, the vast majority of coffee based beverages sold in the UK contain milk, usually in large quantities. The most popular drinks such as lattes, cappuccinos and flat whites are literally just made from espresso and steamed milk, so your choice of ingredients can make or break your business. As an absolute minimum, coffee shops are expected to offer whole, skimmed and soya milk in all their drinks, but many modern coffee chains are branching out to include a wider array of options. Here are some of the options you should consider when deciding on the milk your business will stock. 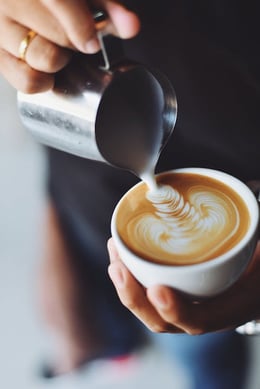 Even just with cow’s milk, it isn’t just the number of calories that separate the different types of milk. The chemical makeup of each variety means they can behave differently and will also have different tastes and textures.

Whole milk – this is a baristas best friend. The higher fat content in the milk means that it will froth up very nicely and keep its structure much more easily than the lower calorie options and has the richest flavour.

Semi-skimmed – as this one sits somewhat between the other two, this can be seen as a fair compromise for those on a restricted diet. The reduced fat content drops the calorie count down a little, without entirely sacrificing the performance and flavour of whole milk.

Skimmed – this type of milk has as much fat removed as possible, which does mean it appears “thinner”, and can be much harder to hold the bubbles needed for frothing. This also generally has a less full taste, but obviously is the lowest in calories. 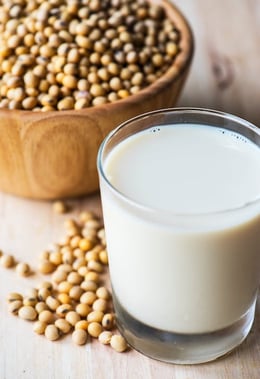 As veganism is becoming more popular, and consumers are generally more aware of the potential health benefits of milk alternatives, having at least one or two dairy free options is an absolute must. They don’t all behave in the same way though, so here’s some of the things you’ll need to know before stocking up.

Soya milk – the most common dairy alternative in the UK, soya milk froths well and has a fairy neutral taste, although when poured in small amounts into black coffees the acidity can sometimes cause it to separate slightly. Good option for lattes, cappuccinos and flat whites, but probably not the best choice for americanos or filter coffees.

Coconut milk – another popular option, coconut milk often doesn’t froth too well on its own, so is most commonly used with something like soya milk added. The taste isn’t necessarily for everyone either, as you can definitely notice a distinctive coconut flavour, although some people love it. A good all-rounder but not for everyone.

Almond milk – this one is becoming more popular, with brands like Starbucks offering it across the country. It can vary hugely between brands, with some frothing well and others not at all, so performance can be difficult to assess. Almonds are very low in fat and sugar and high in protein, so this is often quite a popular choice for the health conscious. Almond milk works very well in cold drinks like iced lattes and is delicious in cold brew.

Oat milk – many baristas feel that this is the best performing of all the non-dairy milks, and at this year’s London Coffee Festival it was the standard milk used by most coffee brands instead of whole milk. It froths very well and produces excellent consistencies for lattes, cappuccinos and flat whites.

Whatever milks you choose to go with, it’s important that your coffee machine can handle the wide variety of different options. With WMF’s Dynamic Milk system your customers can adjust the temperature and the foam consistencies to give them a delicious tasting coffee exactly the way they like it.

Download  a brochure to see the full range of WMF coffee machines and related products.