Why do we love coffee so much?

Everyone knows that coffee is one of the most beloved drinks of all time, with a dedicated fanbase that could rival any other food or drink on the planet. What is a little bit more difficult to understand is, why do we like coffee at all?

If you think back to the first time you tried coffee, likelihood is that you didn’t actually like the taste at all. Bitterness is the dominant flavour in coffee, which in the natural world is generally a sign that something is inedible, or sometimes even poisonous. Bitter is rarely ever a word that’s used to describe something positively, yet for some reason with coffee the bitterness is not only tolerated, but actively desired!

The effect of caffeine

Of course, the most obvious answer to the question is that we love coffee because of the caffeine buzz we get from it. It’s no secret that the high levels of caffeine present in coffee is a major reason why it’s so popular, and it’s definitely the main reason why every coffee shop in London is so busy at 8.30 every morning! There’s also an addictive quality to caffeine which certainly helps repeat business, but it’s not like coffee shops are full of people grimacing as they force shots of espresso down their necks. People genuinely love the taste of coffee once they become adjusted to it, which is something the caffeine buzz alone can’t explain. 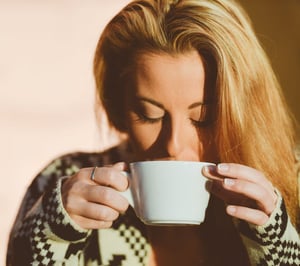 A study last year at Northwestern University in Australia found that people who are particularly sensitive to bitter tastes actually drink more coffee, not less. This goes a little bit counter to what you would have thought, but there is a solid theory why this is the case. In the study, they used 3 different kinds of bitter taste, quinine (present in tonic water), propylthiouracil (a synthetic bitter compound), and caffeine. They found that people who were particularly sensitive to the caffeine flavour were likely to drink more coffee than those who weren’t, but no such correlation was found in the other bitter flavours.

This means that the more able a person is to detect the caffeine in a beverage, the more likely they are to drink larger amounts. The results suggest that it’s not just the stimulating effect of the caffeine that keeps us coming back, but we specifically learn to seek out the flavour. It’s a little bit like Pavlov’s dog, but instead of dog food we get a flat white!

Even considering a person’s ability to detect caffeine, that can’t be the only factor at play, or we would just be drinking the strongest possible coffee all the time. One of the main things that happens once a person is acclimatised to the bitter flavour of coffee, is that with time, they’re able to detect the subtler tasting notes present in the drink. This is very similar to how whisky tasting works, once a person used to the strong alcohol taste, they can discern the more delicate flavours that separate a fine single malt from a cheap blend.

Whatever the reason is, people across the world are in love not just with coffee, but specifically with great tasting coffee. That’s why it’s important for self-serve coffee machines to not just be incredibly efficient, but to produce great tasting drinks consistently. The WMF 9000 S+ is perfect for self-serve areas at businesses like hotels or service stations. With a maximum output of 350 cups per hour, and catering for a wide variety of specialist coffees, chocolate, tea and milk drinks, it’s the perfect mix of high performance and high quality.