Why is coffee called a “cup of joe”? 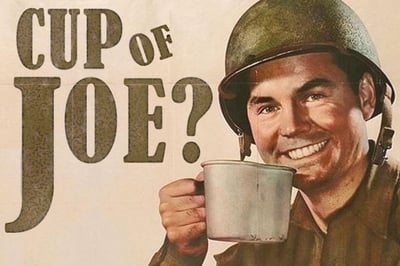 When anyone thinks of slang terms for coffee, “cup of joe” is almost always the first thing that springs to mind. As you may have guessed, the term originates from America in the 20th century, sometime between WW1 and the early 1930’s. The exact source is not strictly known, although there are quite a few ideas out there on where the phrase was first used. Here are a few of the leading theories on where the term comes from and how it became so widespread across America, and eventually the world.

This is the one that is most often presented as the source of the term, although many experts think it’s not likely to be true. The tale goes that during World War 1 Josephus Daniels was secretary to the Navy under president Woodrow Wilson and was well renowned for imposing strict rules that the whole Navy had to follow. One of the most infamous decisions was to completely outlaw any alcohol on all naval bases, meaning that coffee was the strongest drink available to the sailors. Therefore, coffee was insultingly referred to as a “cup of Joseph”, and eventually a “cup of joe”.

The main reason that this theory is criticised though is that the earliest mention of a “cup of joe” found in any literature is in 1930, 16 years after Josephus Daniels made that order. This doesn’t necessarily make it impossible, but it certainly does make it look fairly unlikely.

Some other possible explanations

There are 2 other main theories that are presented as likely origins of the term. Firstly, Joe has long been used as slang for an average, everyday man in American culture (as in an average Joe), and so a possible explanation is that coffee was seen to be a working-class drink for the common man. There’s no real evidence to back this up, but it certainly seems like a logical thought.

The only theory that seems to have real evidence is simply that it was a shortening of another common term of the time, a “cup of jamoke”. Jamoke was a word made by merging 2 other popular slang terms for coffee, java and mocha, and was eventually shortened to simply “joe”. This origin was given in a military officer’s manual from 1931, which is thought to be around the time that the phrase was first popularised.

So while we may not know the exact origin of the term a “cup of joe”, that shouldn’t stop you from enjoying your morning brew just as much, whatever you decide to call it!