Latte art is the finishing touch to a latte or flat white, turning the foam on top into a beautiful rosette, heart, swan, or something even more elaborate. 3D printing technology has been adapted to enable a machine to print designs directly to your foamy coffee, but can this really take over from the art baristas have been perfecting for over 30 years?

Where did latte art come from?

Latte art was developed independently in both Italy and the United States. It closely followed the introduction of microfoam, allowing baristas to make a pattern as they pour foamed milk over an espresso. Seattle was known as a hotspot for developing latte art, making this popular through the late 80s and throughout the 90s. David Schomer was a big part of this, running Café Latte Art courses.

What can these machines really do?

Print icons, words, pictures, pretty much anything you like! Coffee shops have been using to print welcome messages, Wi-Fi codes, shop logos and some even have this as a self-serve machine customers can use at their leisure. 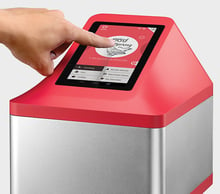 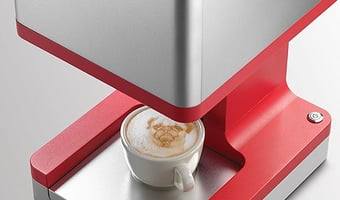 It typically takes 20 seconds or so to print the design, and offers many possibilities for customisation. The majority of baristas create designs and patterns by pouring the microfoam by hand, however to print these detailed designs these machine uses an etching technique (an extreme version!). It uses coffee extract, as its ‘ink’ to print on the foam. Some reviews however had mentioned that this can affect the taste of the coffee.

Something machines cannot do (yet) is create these beautiful and colourful designs we saw from the Coffee Masters at London Coffee Festival 2017. The coffee community have a lot of respect for the art itself and appreciate the skill involved in creating these masterpieces. 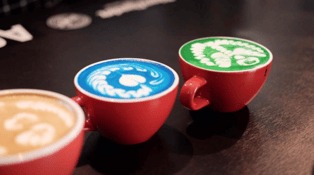 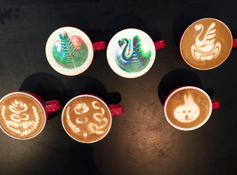 We know technology is advancing by the day, but is technology taking over the world one coffee at a time? Baristas skills and creativity are still in high demand now, but will all coffee machines and coffee shops be automated and machine based in the near future? Only time will tell.

Can we really automate art? There have been mixed reactions across the web, with the question being raised whether this can still be classed as latte ‘art’ as its performed by a machine. Is this just a fad or could this be the next mainstream feature on coffee machines? Let us know what you think.